On the fourth day I left my mother country behind and took the train over the long Øresund Bridge to Denmark and its bicycle friendly capital Copenhagen. Here, I met up with my colleagues from Capgemini Gothenburg and members from my last project. We took a boat tour around the city and had a nice meal together before going back to the hotel for a drink. 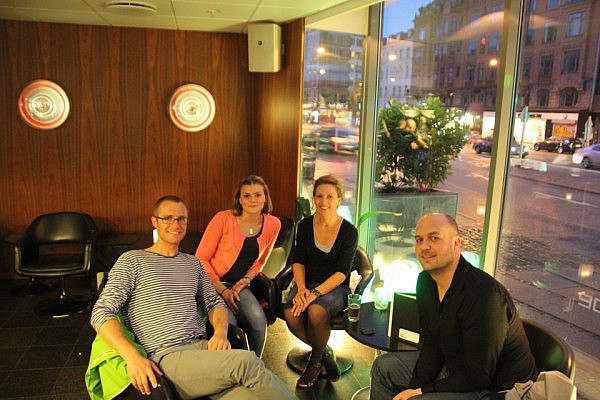 I had a couple of reward nights to use at Scandic Hotels and was really looking forward to the big breakfast buffet that was waiting for me the following morning. But I slept very well and woke up fifteen minutes too late – oh noooo! I rushed down the stairs and the only things I managed to scavenge were 3 wienerbrød (Danish pastry) and 6 eggs. 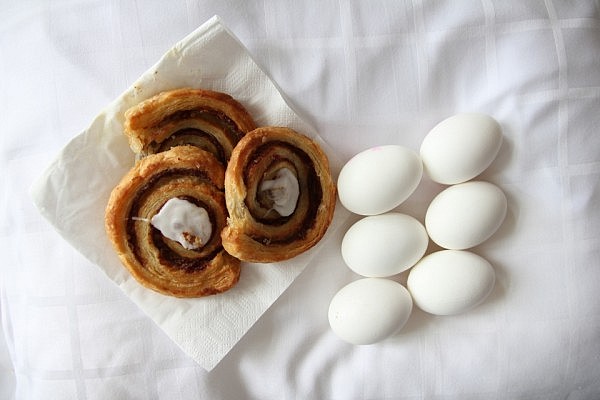 I spent the rest of the time in Copenhagen seeing old friends and resting. I stayed at my old primary school friend Beatrice’s apartment, which she rents from and shares with the famous architect Jens Arnfred (who has designed the Torpedo Hall). The apartment was very nice and built next to the channel as a warehouse during the 17th century. 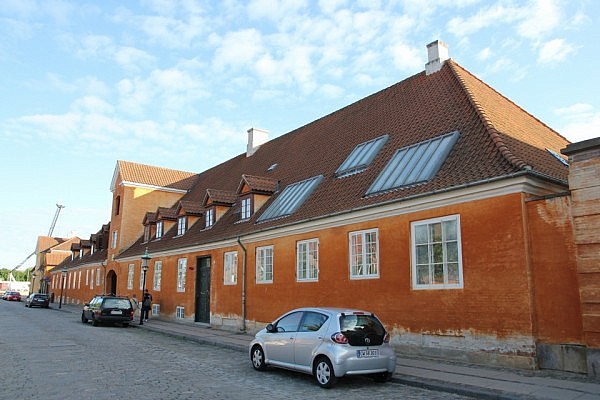 In the basement there was a gallery with art made by a man known as Viktor IV, a big-bearded artist who lived on a boat in Amsterdam until the mid-eighties. He made art from driftwood and paper and invented ingenious clocks and watches that turned counter-clockwise. He also liked cats very much, so much that he painted them in different colors and patterns (!). In his early life, he was bicycle touring in South America just like me. Interesting man and interesting gallery indeed!

Together with Bea, we caught up with Jocke, another friends brother (also from primary school) that I hadn’t seen in several years. We had many good laughs at old school memories we recalled. One day I went urban bouldering near Kastellet, in a tunnel where you can climb on the walls. I also went to the famous hippie district Christiania, where they sell marijuana and hashish openly on the street in the “green light district”. There were several concerts and funny people to watch! 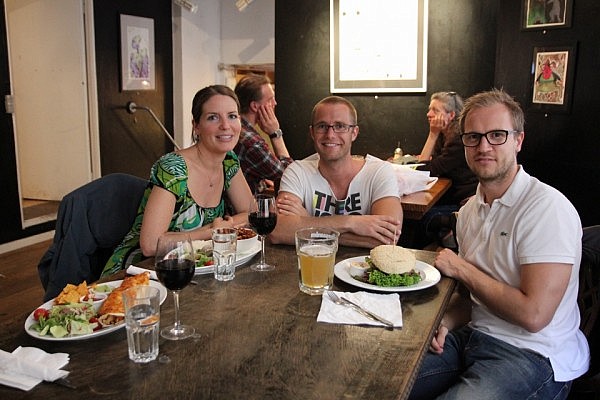 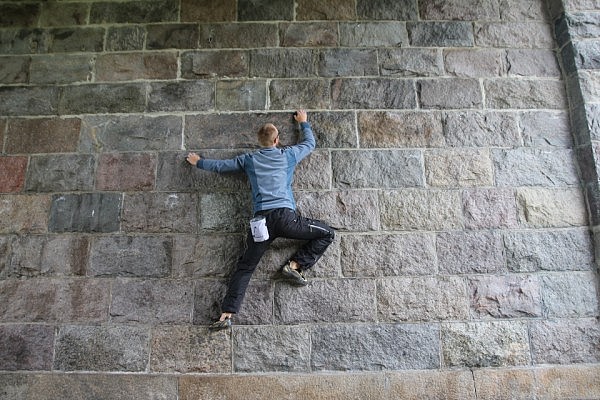 After three days in the capital I continued cycling. The island of Fyn was very beautiful and with well-marked bicycle paths. On the way, I passed billowing barley fields, stripes of red poppy flowers and windmills scattered throughout the landscape. At one point I cycled past a huge field of strawberries, with the wind coming from it, and the fragrance was so intense that I could imagine myself being inside a jar of jam. After having camped in a dense beech forest that night, I found not only myself having breakfast, but loads of ticks too! I removed 11 from my body and found 15 or so still crawling on my clothes. I think that’s a new personal record, yay! 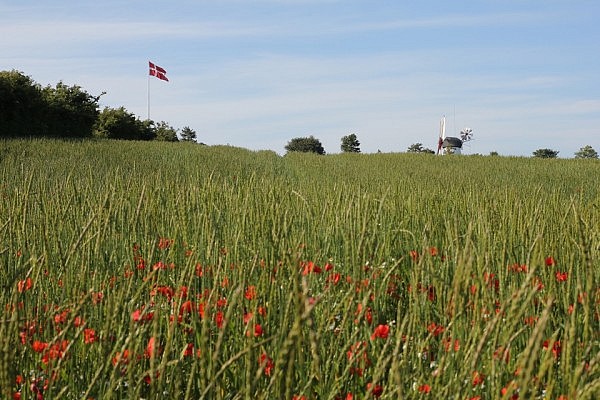 On the third day of riding after Copenhagen, I was having pretty bad pain in my left knee. This all actually started during the first few days of the trip. I should have taken it a bit slower in the beginning, since it’s a new bike and a new position. I did some more research and I’m having medial knee pain, on the side (inside) of the kneecap. It can be due to the saddle height, too strong/stiff quad muscles and/or (most probably) my old SPD cleats that are loose and creating too much float. At least I’m glad that it’s not the same issue I had in South America when I got an inflammation in the ITB tendon from trekking.

Luckily, I have two good friends (Susana and Anselm) living on the German border in the south of Denmark that I arrived to on the same day. We’ve been studying together at NTU in Singapore and it was lovely to see each other again! They live in a kind of bohemian way in a cozy house with wild nature just outside the door. We cooked nice food, made elderberry juice and relived old memories from the time in Singapore. 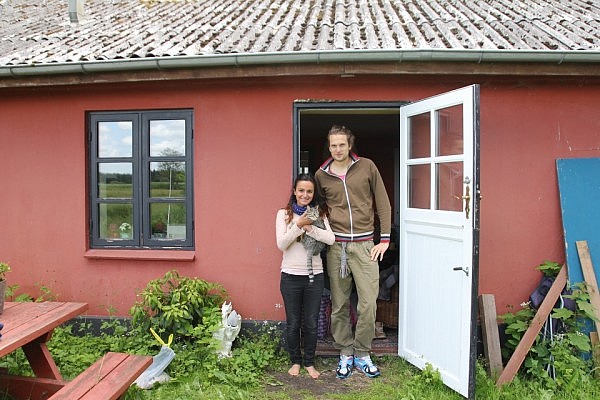 One day we took a long walk around the area. The village they live in is concentrated around a small river that has been dammed, creating a lake with wetland. We followed the river upstream, walking across fields of barley and corn. There was some flint rock in the field, and just when I told the others about my childhood when I used to collect minerals and fossils and that you could find tools from the Stone Age made in flint, I spotted a kind of arrowhead (or projectile point in archaeological terms)! After a few minutes, we found several more and even some objects we thought could be scraping tools. I was really excited, falling back on my old dreams about becoming an archaeologist, haha! 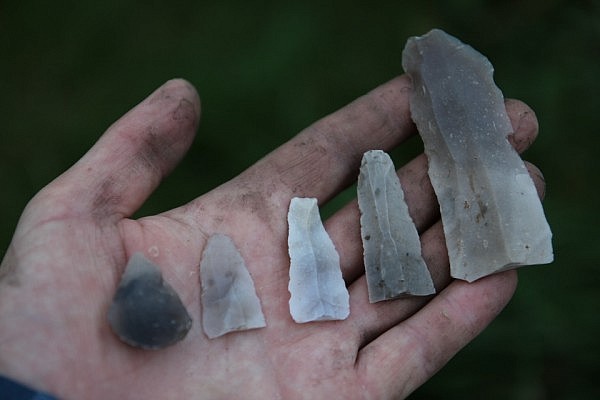 In the end of our walk, we climbed up in a big tree to get a better view of the area and somewhere in that tree the idea about crossing the river was born. From this spontaneous idea came an extremely diffuse plan, and off went the clothes. With all our belongings in small bundles above our heads, we drifted off into the gentle current. We quickly realized that the river was quite cold, so we crawled up on the bank and found ourselves in the middle of the wetland. Still happy and curious about what we might find ahead, we continued our hike and had to cross a murky swamp before reaching solid ground and yet another corn field. We made a high-five-we-made-it and walked back home with bare feet and celebrated with a glass of elderberry juice. 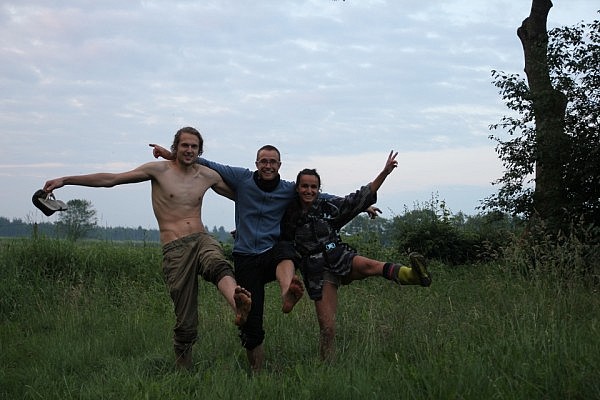 Sus and Anselm left this morning for a trip to India where they will study yoga, and they are letting me stay in the house for as long as I want to. I’m so lucky to have such good friends! So here I am and I will stay for some days, stretching my body, fine-tuning my bike and take walks around in the nice nature contemplating about life in general. It’s not so bad after all :-)