Hospitality and Swedish history in Gambia

When studying a map of West Africa, it is easy to start laughing when looking at the geography of Gambia. This tiny little country is the smallest in Africa and the border seems to have been drawn into the shape of a worm, obviously because of the Gambia River. Starting from the sea, the country follows the river some 300 km’s inland and is bordered on all sides by Senegal.

While approaching this former British colony, I got hooked on the idea of taking some smaller roads that I had spotted on my map. When I was getting closer, people told me that there was no border post but I didn’t feel like wasting a full day to return and reach one of the official borders, so I pushed on. Eventually I reached a small river that I crossed by foot while carefully carrying over the equipment one piece at a time to the other side. The strong sun in combination with having to push the bike through a lot of sand made me a bit dehydrated and after continuing a few more km’s, I sat down under a big mango tree to have some rest. After a while, a man riding a donkey comes by and says “Good afternoon sir!”. Surprised by him speaking English, I realized that I must be in Gambia and he happily confirmed that this was indeed true! 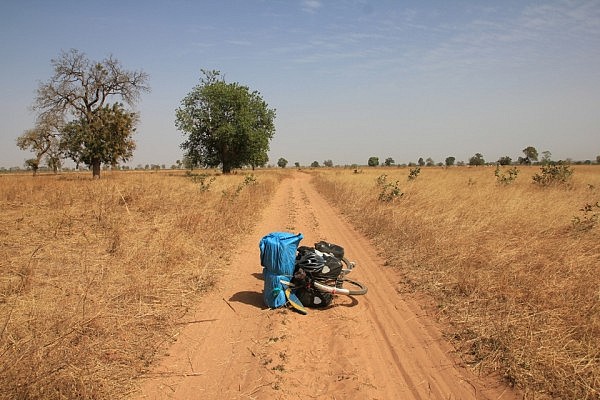 I had arrived to a village called Njawara. The first guys I met here, Aniss & Mohammed, were studying here at an agricultural school and I was more than welcome to stay there for the night. The next day I kind of realized that maybe it’s not the smartest thing to move around illegally in the country, so me and Mohammed took a motorbike ride to the nearest immigration office to get my passport stamped. Of course the police officer asked for money in order to help me with this matter, or a “donation with an official touch” as I interpreted it after some debating. I had promised myself to not pay any bribes whatsoever on this trip (and thereby supporting an already corrupted society) but here I made an exception because I knew that I had done something wrong. So I gave him 2 euros and thanked him in silence for not sending me back to Senegal on the bad sandy roads that I had come from.

On the way back with the motorbike we somehow managed to drive into a line of clothes that were hanging outside to dry. We got a big piece of draped garment stuck on our heads and continued a few meters without seeing anything before coming to a stop just before driving into a fence. I still remember the laughter that followed from the people who saw us from the house nearby, hahaha!

The EU-funded training center called Njawara Agricultural Training Centre train farmers and students in sustainable agricultural techniques with the purpose of improving farm production and profitability. Currently, the students were experimenting with onion, eggplant and banana and I spent a few days exploring the plantations and making friends before moving on. 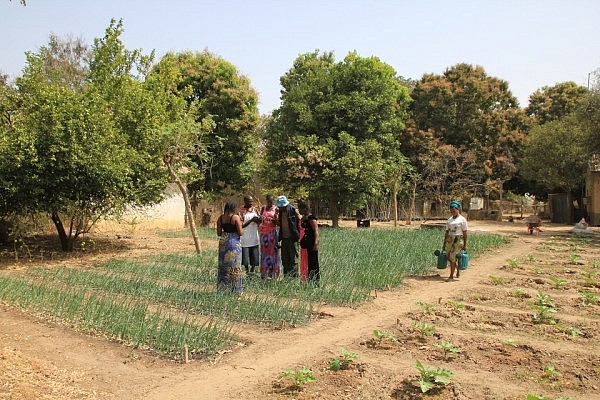 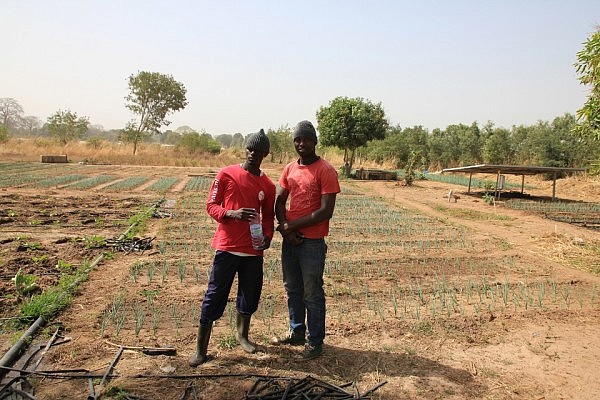 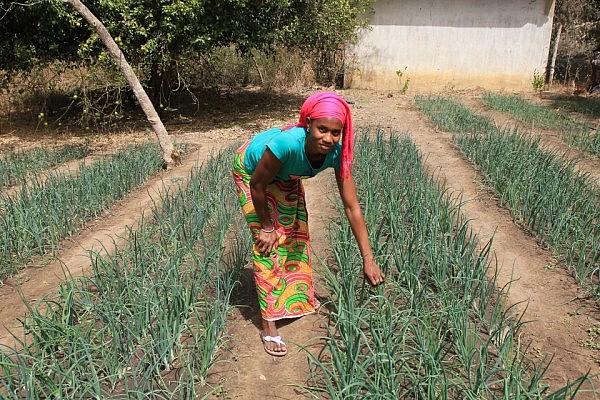 I had been a bit sick (bad stomach) the last few days but now felt better and was happy about the returning appetite. During the time at the training center, we had eaten rice with peanut sauce at almost every meal and now I longed for vegetables and fruit! So strong were my cravings that I almost thought that I was lacking vitamins or something. I stopped at a big market in Farafenni and bought ingredients to prepare a vegetable stew with fresh beans and sprouts and found tamarind and coconut for dessert. I remember that at one point in the hot and dry afternoon I was longing for rain and the smell of wet soil and I thought that I could spot some dark clouds in the distance, but I didn’t make it much longer before my rear tire went “BANG!” and I had to camp on the spot, too tired to repair the big holes caused by a weird metallic object that I hadn’t seen because of my daydreaming… 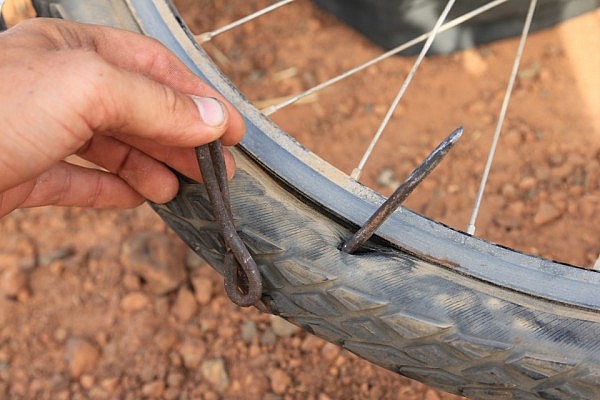 The next morning, I repaired the tire by taping pieces of plastic inside and shifted it to the front to ease the pressure a bit. Then I was ready to cross the Gambia River with a ferry. On the other side, a newly paved road marked the way to the coastal area. After lunch, my thermometer marked 43 degrees Celsius in the shadow 1 m above the black hot tarmac. No matter how much I drank, I almost didn’t pee. Not often do I take a break during the day because it is too hot, but this day I couldn’t resist the temptation of the shadow of a mango tree with a bench underneath. The local boys came to give me baobab fruit and oranges in exchange for me learning some of their Fula language. Deal! 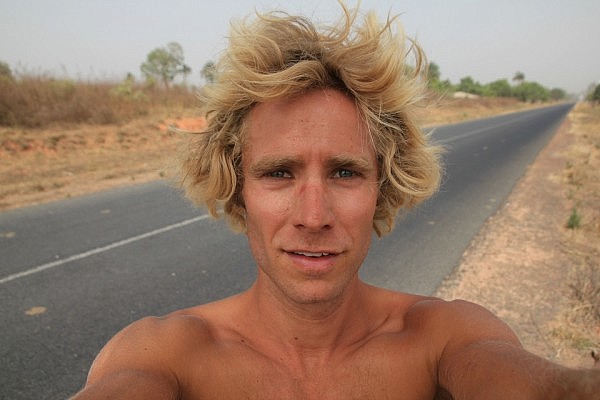 The same night, I met a teacher who invited me to stay at her house. She was adorable, and a very hard working woman (like most other women in this part of the world). She woke up at 5am every morning to cook breakfast for the family. For this she had to collect firewood and fetch water from the well. Then it was time for some cleaning, maybe laundry and preparation of lunch. When this was done, she went to the school to teach. After she finished at the school, she had to water a big garden before hurrying back to cook dinner. And before going to bed at around 11pm, she prepared biscuits that she would sell at the school the following day. Luckily, she got some help from her children. 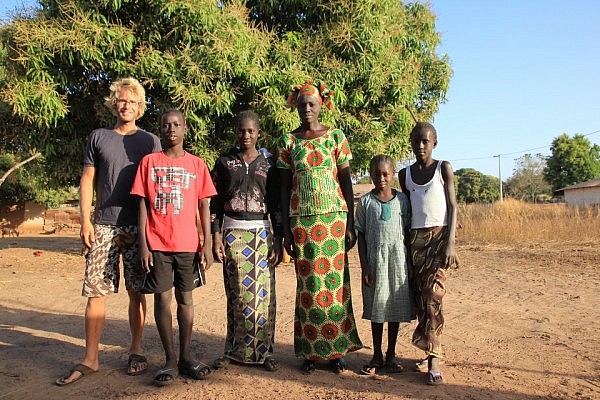 The first thing I did when I reached the coast was to head to the touristic area called Senegambia and have a beer on the beach. Gambia has been exceptional when it comes to people telling me how much they would loooooove to go to Sweden and that perhaps I could help them even the slightest little bit in this process. But of course the answer is always no – I can’t. I got several such requests only while drinking that beer. Someone also told me that there used to be a popular Swedish radio station in Gambia. I already knew this, but had almost forgotten about it now that I was finally here! So I quickly jumped on the bike and headed to the capital Banjul (distances in coastal Gambia are not very long), where I was hoping to find “Radio Syd”.

The story about this radio station and its people is remarkable and unique and I am truly happy that I found the place (or at least remains of what it once was) here in Gambia:

In the early 60s, Sweden had a radio monopoly and only the state could broadcast radio, all other broadcasting was forbidden by law. This annoyed a woman called Britt Wadner, who decided to buy a boat (named Cheeta) and broadcast “pirate radio” from Öresund on international waters between southern Sweden and Denmark. The communication minister at that time, Olof Palme, didn’t like this so Britt was sentenced to prison. This caused a lot of attention in the media, even internationally, and Britt became known as the “pirate queen”. Elvis Presley sent her a letter and Rolling Stones came over on a visit. When she got out of prison, she insisted on continuing to broadcast radio. But since she was not allowed to do it in Sweden, she decided to do it elsewhere. And for different reasons, the boat (Cheeta II this time, the first one sank during a storm) made its way through Holland, England and the Canary Islands until it finally ended up in West Africa and Gambia where Britt was able to broadcast radio, completely legal this time. On the 7th of May 1970, the signature melody “Så länge skutan kan gå” by Evert Taube could be heard in Gambia, as Radio Syd officially went live again. There’s a great quote from her that I found in a book that was written about the whole story: “Never did I imagine, when naming the station ‘Radio Syd’, that we would end up this far south” (“syd” means south in Swedish). The radio station evolved and made its way from sea to land. So did also Britt and her plans in Gambia. She built a big hotel here and, given the timing, was part of introducing charter tourism in the country. With the help of Britt’s children, the broadcastings continued for many years until the beginning of the new millennia, when the 80 meter tall antenna snapped in a storm and fell down over the house that was split in two pieces. 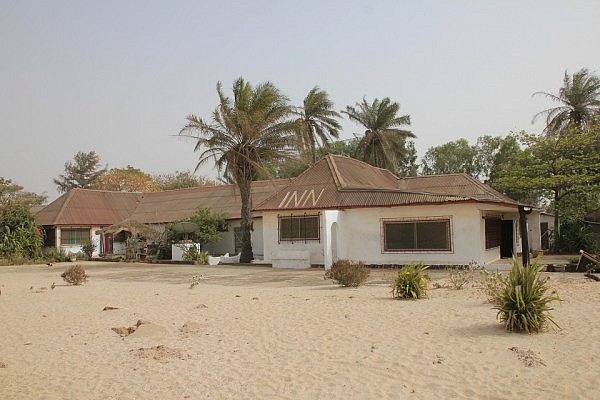 Britt’s daughter Connie and her husband Benny are running a guesthouse here nowadays and it is this couple that I met when I arrived to Banjul. I was very happy to meet them and find a part of my home country in this part of the world and we shared many laughs during the days I stayed there. They had loads of good stories and anecdotes to tell and I was amazed by what they had experienced during all the years in Gambia. Dear friends, thanks a ton for the great hospitality and delicious food! 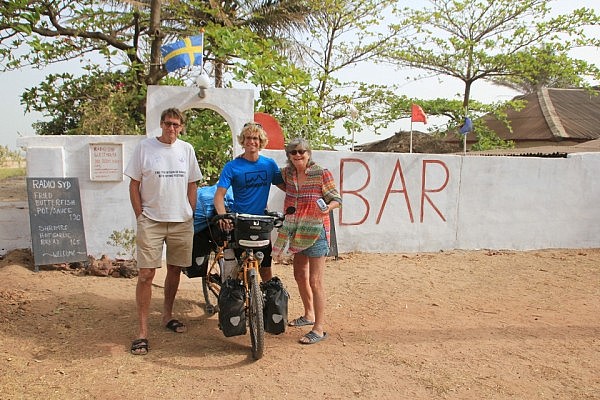