Leaving little Gambia behind, I re-entered Senegal and cycled through the much greener region called Casamance. I had already arranged two visas in Gambia: Sierra Leone and Guinea. The visa to the next country Guinea-Bissau was quick and easy to get at the consulate in Ziguinchor, close to the border. 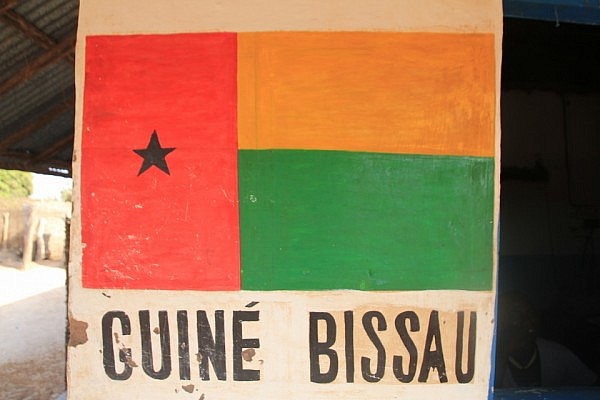 If Casamance seemed green, Guinea-Bissau was even greener and with more rivers and humidity – it felt like I was approaching the tropics. One of the first differences that struck me when crossing the border was that instead of the kids shouting “toubab”, they now shouted “branco”, which means white in Portuguese. People generally called for less attention though and this felt relieving! But on the other hand, instead of asking for gifts and money, people asked more for food and the country felt quite poor, some people’s houses that I visited on the countryside didn’t have many belongings at all. More things that I noticed was that the traffic on the main road was reduced a lot, and people seemed to use bicycles instead of donkeys/horses with carts to transport their goods.

One of my first encounters with the locals was quite funny. Some km’s after the border, I saw a pile of clothes lying next to the road, and when I turned my head to look in that direction, I see a half-naked woman lying in the mud of a mangrove swamp, reaching with her hand deep in the mud. It first struck me as a very bizarre sight, and I am not really sure what went through my head, but a second later I realized that she must be collecting oysters, because I had seen this being sold along the road earlier.

The same night, I camped in a forest of cashew trees and had the best night’s sleep in a very long time. I woke up once by some sound though, and was surprised to see a Gambian pouched rat walking around the tent and then running away with an opened tin of sardines. People asked me why I didn’t catch it later when I showed the pictures of it – it’s common as bush meat here. 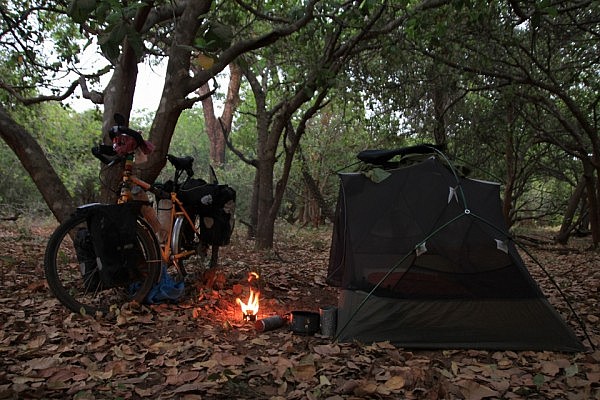 When you are in a hot climate, the best sleep is found outside where the air is fresh. Houses absorb the heat during the day, and radiate it during night. Sleeping inside in villages often involves mosquitoes (if there is no mosquito net or you are unable to install your own), and noise in the form of music, chit-chat, arguing, roosters, dogs and call to prayer. So wild camping is the way to go to find a peaceful and good nights’ sleep.

The next morning, I woke up to a beautiful day in a new country, and got on the bike early to enjoy the fresh morning air. I saw groups of colorfully dressed women emerge like ants from the small jungle paths carrying palm wine on their heads to sell along the road. People greeted me with big smiles, “bom dia”, and told me carnival and pointed in the direction I was going. It turned out that I managed to time the last day of the biggest event of the year, the carnival!

I had previously received a contact to a teacher that lived in the capital Bissau, so I stayed with his family for some days. Together with their son, we went out to see the carnival but unfortunately there was no parade the last day. There was still party though, the main streets were closed for traffic and completely full of happy people sometimes wearing funny clothes. Definitely affected by Brazil, it almost felt like I was on the other side of the Atlantic Ocean judging by people’s styles, they dressed more “western” and bold. 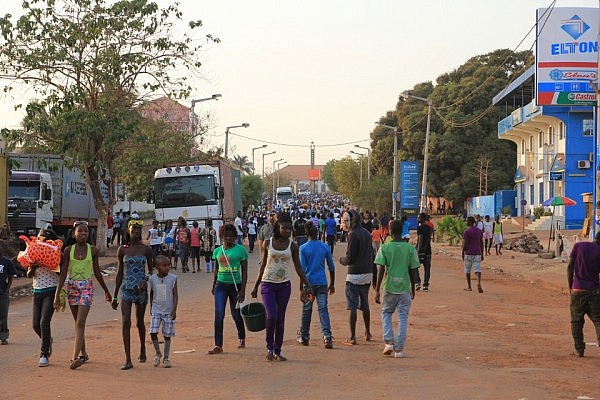 I had heard that it was tough to get the visa to Nigeria further east and got told by a friend that it was supposedly easy to arrange here in Bissau. So I went to the embassy and with almost no questions asked, I could collect it the same day. Starting on a date that I picked myself and valid for 3 months – perfect! Now it’s only the visas to DRC and Angola that might be a bit tricky to get. I happened to cycle past the Angolan embassy and thought I would just ask a few questions since this country was also Portuguese-speaking and all, but the security guard just looked at my dirty t-shirt and asked me to leave. So that’s what I did.

I was happy to find my “Portuñol” (Spanish with Portuguese pronunciation) understandable by the majority of the people – communication felt easy. One day after leaving Bissau, a random girl invited me to eat some rice with peanut sauce. Her family was very sweet so I ended up staying there for a couple of days. The girl was only 16 and showed a big liking for me; she wanted me to stay for a week and to meet her father etc. Age here in Africa is very different from that in Europe. Here, age is of less importance, if not irrelevant. I didn’t want to crush any African teenage hearts, so I moved on. 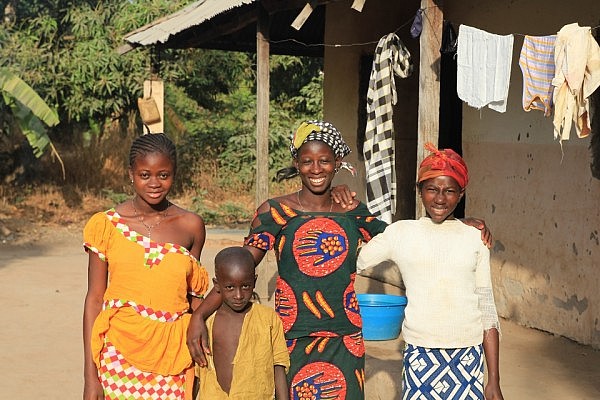 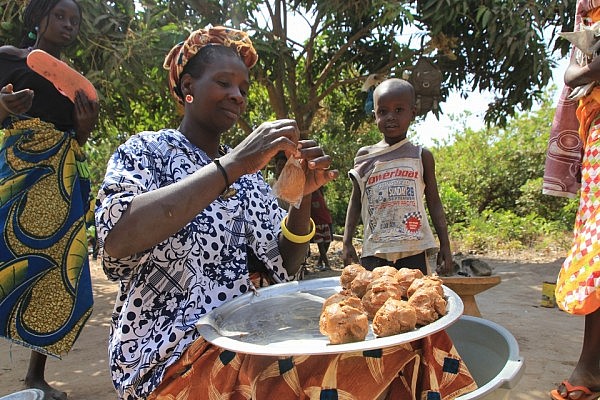 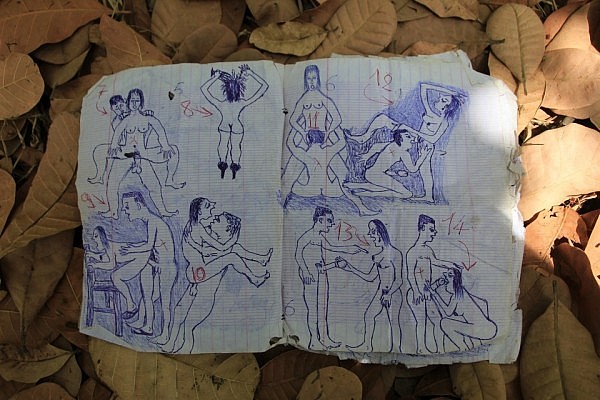 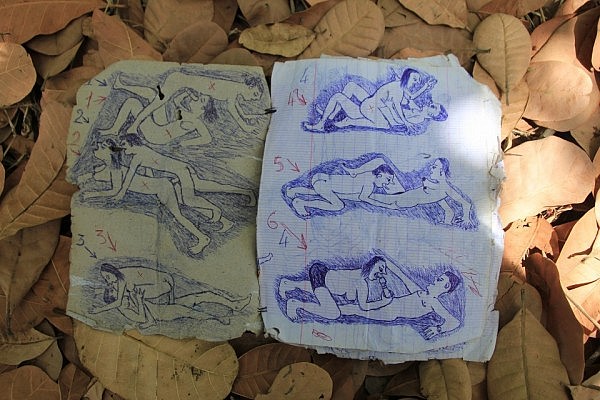 For the first time since I left the Atlas Mountains in Morocco, I found myself looking at solid rock again and I remember that it felt assuring and safe in a way. There’s something stable and constant about seeing this in an otherwise ever-changing environment full of twisting vegetation. This rocky area was surrounding the Corubal River, a beautiful river which I would come to pass several times in the next few days. I couldn’t wait a minute before getting into the cool and clear water. I was accompanied by women doing their laundry, and curious children diving under the surface to get a closer look at the white man’s even whiter butt. 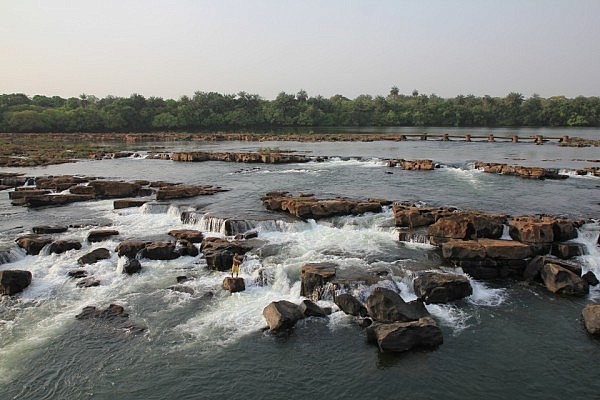 I had just started on what would be a short detour through the southern parts of the country that was supposed to be nice. From Quebo to Gabú via Boé and ChéChé, and then over to Guinea. It was indeed a great route! This road is rarely traversed by cars, so sometimes it felt more like cycling on a single-lane path, with high grass on both sides adding to the experience. I passed remote villages with round clay huts with grass roofs and saw bare-breasted women pounding cassava. People were poor and shy and here I never heard anyone shout “branco” at me but only whispers and giggling. I saw two kinds of monkeys too: patas monkeys and a bigger black one which might have been a chimpanzee (!) 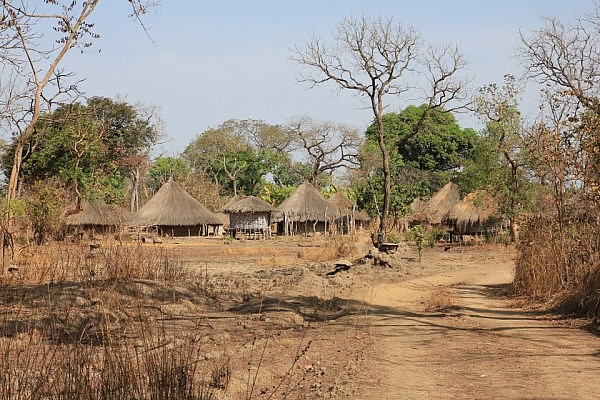 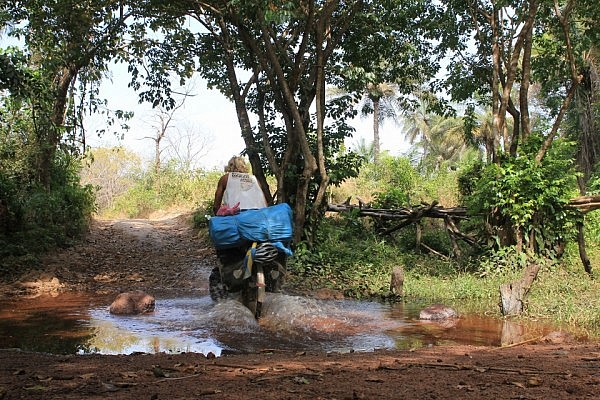 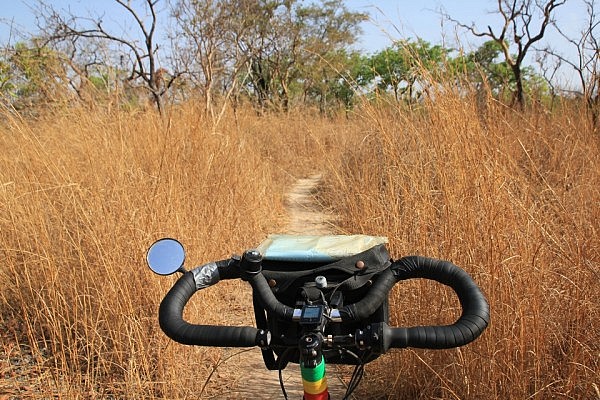 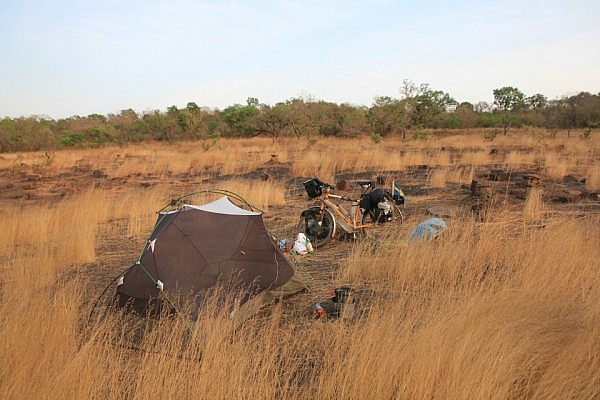 One day I thought I was going to go crazy. I was constantly attacked by horseflies and flying ants. As soon as I stopped only for a few seconds, the horseflies were all over me, and their bites can itch for weeks. If I cycled with a normal pace, they were fast enough to catch me and were in particular biting me on my wrists and calves, were there was no wind. The only way to escape this madness was by cycling very fast, but in this heat I couldn’t do that for too long. This combination of exhaustion, over-heating and attacking insects was driving me mad! I didn’t know what to do! The locals that saw me waving my arms while riding like a maniac looked very confused. Thankfully, the river appeared again later that day so I submerged myself in the water like a hippo and stayed like that for a long time. 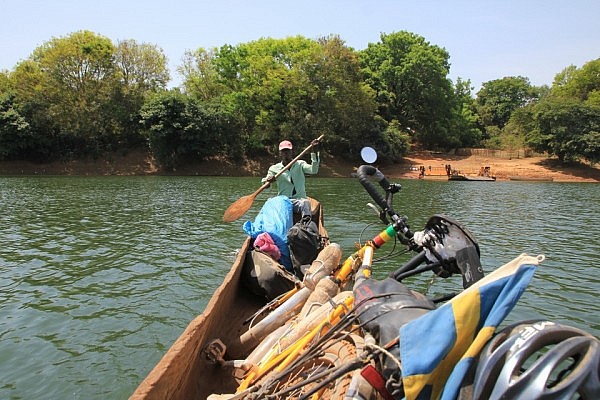 I crossed the Corubal River in a canoe and later came to a village called Canjadude where I got excited because big boulders suddenly appeared on the side of the road. Time for some climbing! I saw great potential here and stayed for the night to explore more. Hundreds of blocks in all sizes and shapes laid scattered throughout the area. 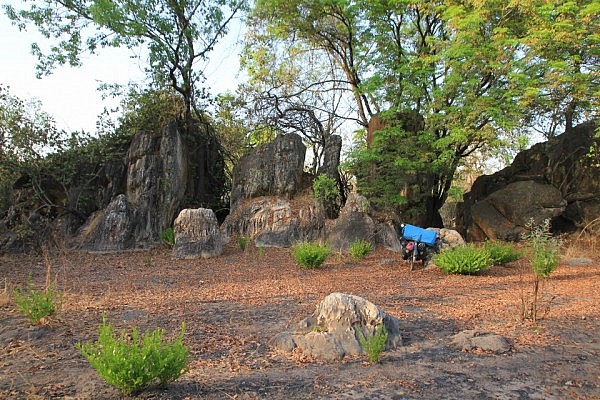 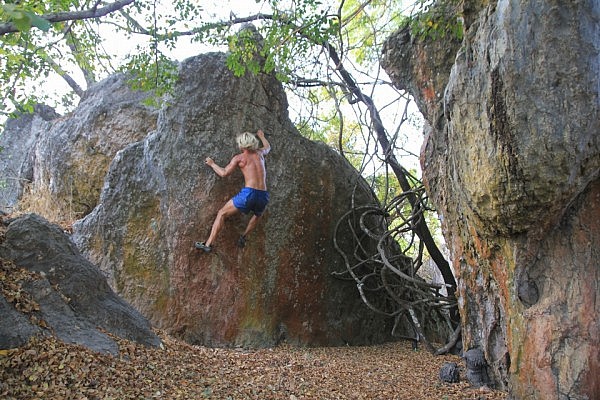 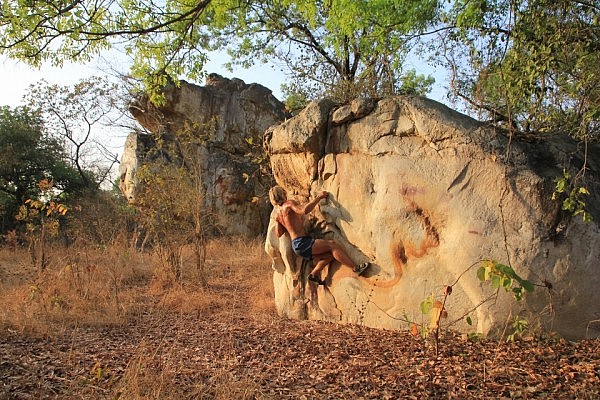 The cashew for me became somewhat synonymous with this country. Forests of what seemed like planted trees lined the roads through many parts of the country and the sweet fragrance coming from the flowers was seducing, feeling like a mix between lily of the valley and temple flower – two of my favorite flowers.

I had never tried cashew fruit before but knew that it was edible since I had seen kids eating them, so one day I picked one from a tree to try. It tasted both good and bad, but slightly musty. Then I thought I might as well eat the cashew nut itself that hangs under the fruit, so I tried to bite open the shell but that was a mistake. It felt like I got burns on my tongue and lips and the effect was immediate! I had vague memories of having read somewhere that there was something about cashew that was poisonous, but couldn’t recall what it was. Now I got my answer – and this is why people roast and crack them to reach the nuts. I didn’t know how poisonous it was so I cycled on and hoped for the best. The cashew shell apparently contains a phenolic resin that is toxic. My skin turned white where I had bitten it and I got some blisters, but this disappeared after a few days.

Before I came to Guinea-Bissau, I had heard that it was a super corrupted country whose archipelago was famous for being the main point of entry for trafficking cocaine into Africa and Europe. I think I expected things to be a bit on the rough side, but I didn’t see any of this at all. With almost no traffic, virtually no tourism, not many people calling for your attention, a generally laidback atmosphere and beautiful nature, I can highly recommend travelling here!