Arriving to Africa and cycling through the Atlas Mountains

The Strait of Gibraltar that separates Europe from Africa is only 14 km’s wide, and the ferry from Tarifa to Tangier takes about 35 minutes. When I got off the ferry, a policeman asked if I had any weapons and if I was going to cycle through Morocco. I replied that I will cycle through Africa, he said “cool man” and welcomed me to Morocco with a big smile.

At first, I felt a bit confused. I could still clearly see Spain on the other side, but I found myself in a completely different culture in only half an hour. Clothes, smells and the way people seemed to socialize were so different. In one way, it gave me an exotic impression, but on the other hand not, since it was so close to the rest of Europe. In South America it was different because I had taken a long flight to get there, where everything in between then feels like a black box with unknown content. This time I had cycled every single meter and knew exactly how people and nature gradually had changed to finally create what I was now looking at, and all this in only 3.5 months and 5,550 km’s. The thought of spending the next 1.5 years or so on this new continent, and cycle all the way down to South Africa, made me very excited and filled with emotions!

The first things that struck me about Morocco was how helpful and kind people seemed to be, and how much men that were sitting in the cafés drinking tea and coffee. It felt strange to not have the usual mix of women, but this absence later became normal.

On my second day in Morocco, I walked out on the street only to find it completely deserted, except for a few men walking around with blood on their hands carrying big knifes. I knew that it was a Muslim festival called Eid al-Adha during these days, but at first I didn’t make the connection and wondered what the hell was going on. It turned out these men are looking for jobs, because during this holiday each family traditionally slaughters a sheep. When I walked to the center in search for food (all the shops were closed), kids were running around with sheep heads that they later cut the horns off and burnt over open fires on the street, in order to remove the wool. The heads were later used for cooking a traditional couscous dish. 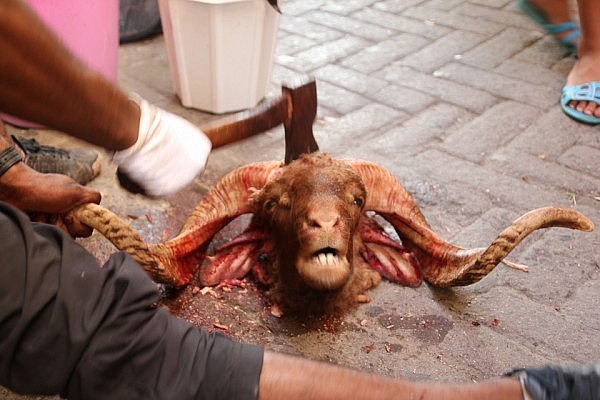 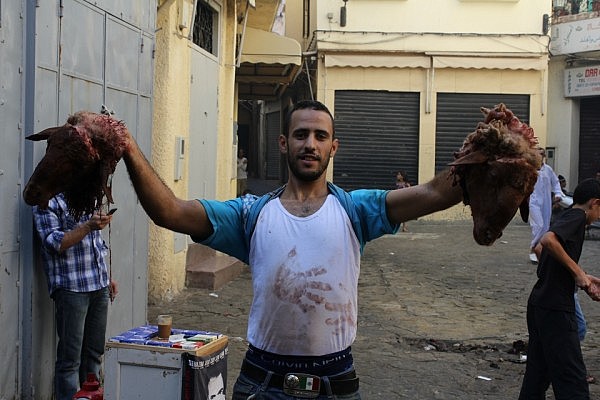 Jenny, who I cycled with in South America, was coming to join me for a few weeks in Morocco and while I was waiting for her I took the bus to the capital Rabat to arrange the visa to Mauretania. Unfortunately, the embassy was closed for a week even though I had called them in advance to verify the opening hours, so it was nothing else to do than going back.

I had been waiting for the reunion with Jenny for a long time and it was great fun to be back on the roads together! First, we went to Chefchaouen which is called the “blue city” because of its many houses and alleys painted in shades of blue, mostly inside the medina. I should probably explain what a medina is, because it’s very common in Morocco. A medina is the oldest part of many North-African cities and it contains many narrow and maze-like streets, usually with a big wall surrounding it. This is basically the place to look for cheap hotels, eat cheap food, and watch people while sipping on a glass of sweet mint tea. The medina of Chefchaouen looked almost like from a fairy tale with all the blue colors. 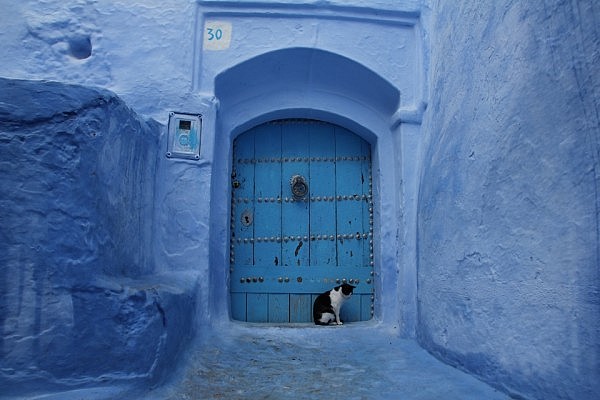 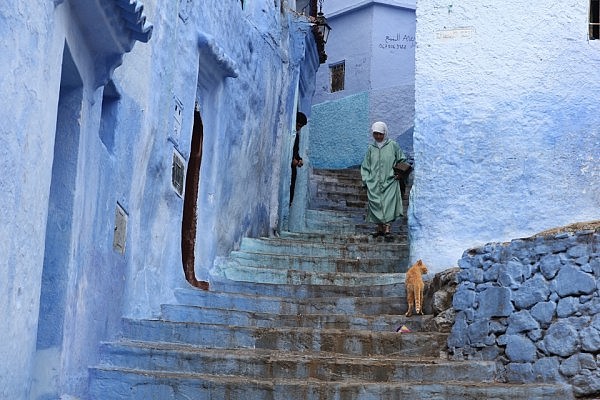 The road to Fès was nice and surrounded by a lot of olive trees. People passing always waved their hands and greeted us, and some gave us fresh pomegranates, apples and oranges. In one tiny village we encountered kids throwing stones at us, but fortunately for both of us, they missed.

Fès is a great city! The medina is a UNESCO heritage site and considered to be one of the largest car-free urban areas in the world. We got kind of lost inside with all the narrow alleys and I don’t think I would have been able to backtrack, but following the crowds we managed to find our way back to the hotel. We saw everything from wedding chair carpenters to leather tanneries and what not. We went crazy on all the different types of food we could eat, and I found a new favorite dish called “pastilla”, which is a kind of sweet and salty pie made of a crêpe-like crust filled with chicken, egg, onion, crushed almonds and spices, and finally garnished with cinnamon and powdered sugar. I found a new favorite pastry too, an almond cookie called “ghriyba” that I bought half a kilo of before hitting the road. It is always a feast to come to the big touristic cities, because the small shops on the country side don’t sell much more than canned tuna, canned mackerel, eggs, bread and laughing cow cheese. By now, I have given up all hope on finding oatmeal for the porridge and instead converted to couscous. 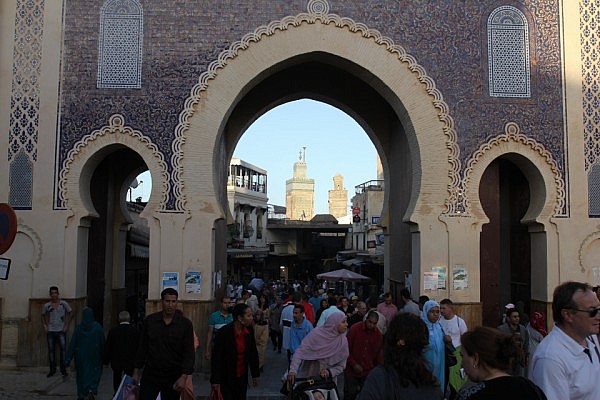 I got a new nickname here in Morocco because of my beard – Ali Baba. At first I found it flattering, but by now I am quite tired of hearing it because every time I enter a city the men on the street shout it out loud in excitement when they see me. In the tale where the character comes from, “Ali Baba and the Forty Thieves”, he is considered to be a good guy so it is actually a compliment and not an insult :-) 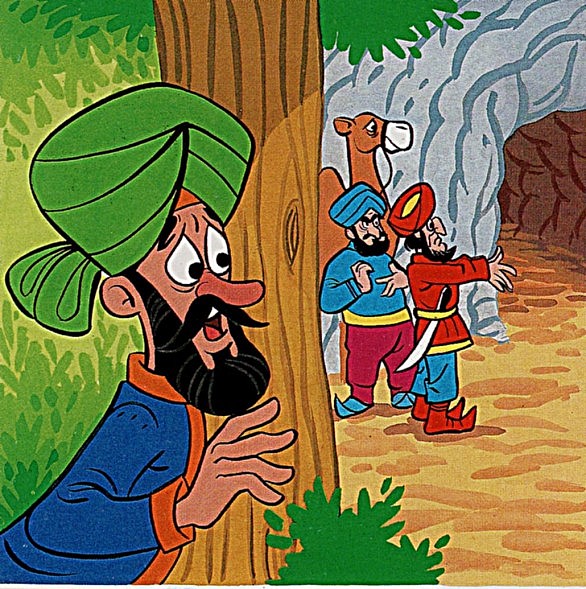 South of Fès we headed towards the mountains with cedar forests near Ifrane and Azrou. These forests are also home to Barbary apes, a special kind of macaque living only in the mountains of Morocco, Algeria and on top of the Rock of Gibraltar. It was mating season which meant lots of fighting and copulation going on. 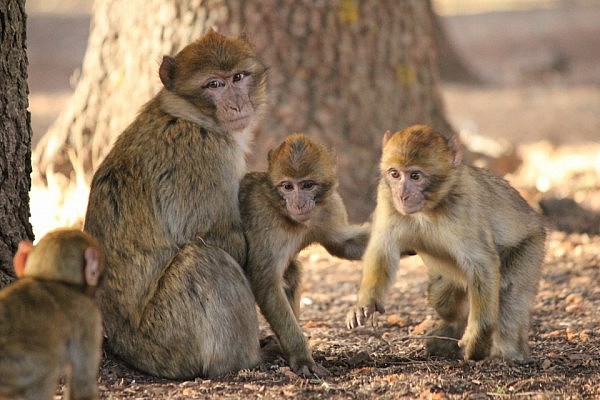 In the city of Khénifra, we made an amazing discovery. I have always loved avocado, but don’t know why I’ve never tried avocado milkshake before. Anyway, that’s what we did, and it was love at first sight for both of us. You have to try this at home! Only avocado, some sugar and milk. Yummy!

We continued towards the mountains of Middle Atlas and a village called “El Kebab”, in search for what you would expect from a village with such a name. Unfortunately, we didn’t find what we were looking for, but instead got invited to the home of a local family to have tagine – the best one so far! Tagine is the most common dish you see in Morocco and it’s basically vegetables and meat cooked inside a special clay pot, preferably over open fire. 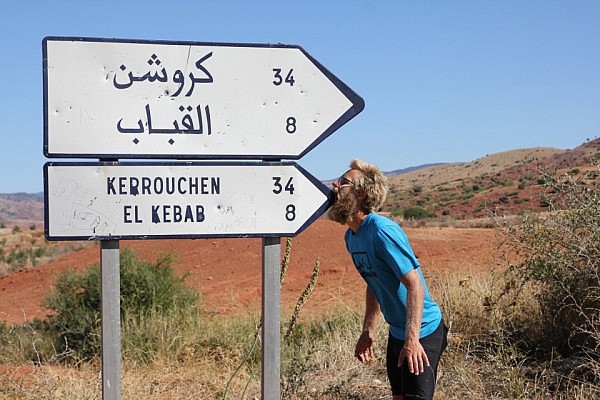 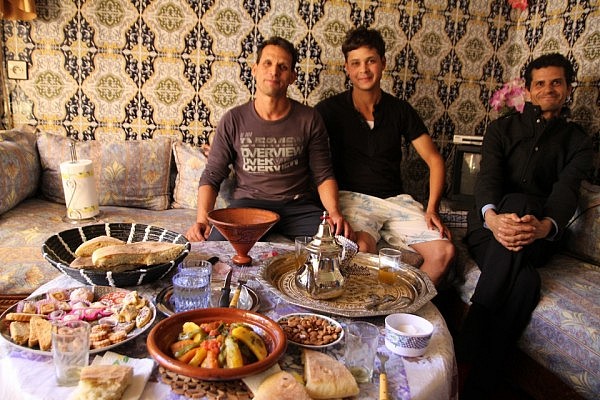 When we entered the High Atlas, we made some detours and mountain passes on small gravel roads that I had been recommended by another Swedish cyclist. First, the road from Agoudal to Msemrir that took us over the 2,900 m high Tizi n’Ouano. Epic mountain landscapes and big gullies created by the erosion caused by weather and wind. 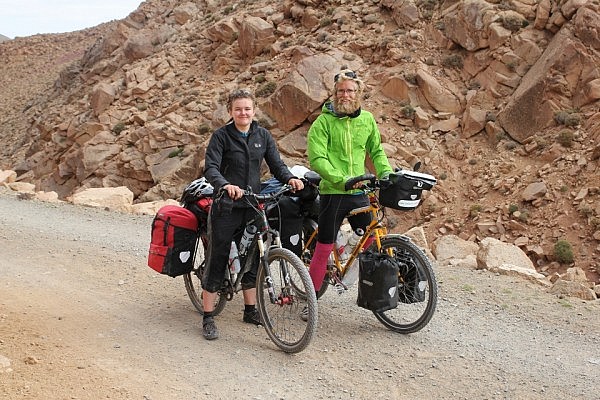 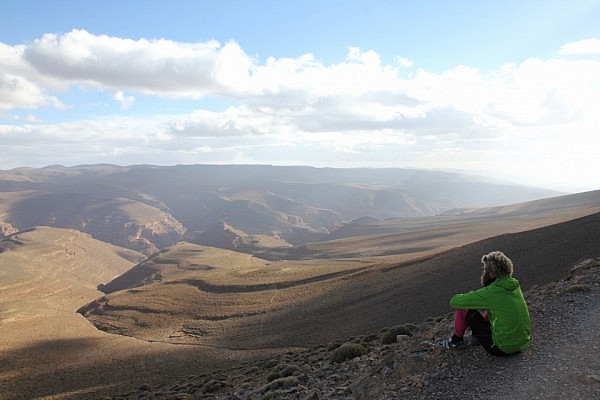 From Msemrir we continued on a really bad but stunning road over the 2,645 m high pass Tizi n’Uguent Zegasaoun to Tamtattouchte. Sometimes you couldn’t see that it was a road at all, but just a riverbed with big rocks. The red mountains looked like they had been carefully carved out by the hand of a skilled artist, beautiful! 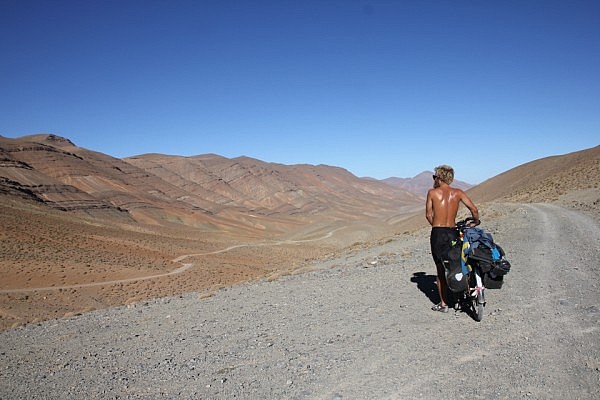 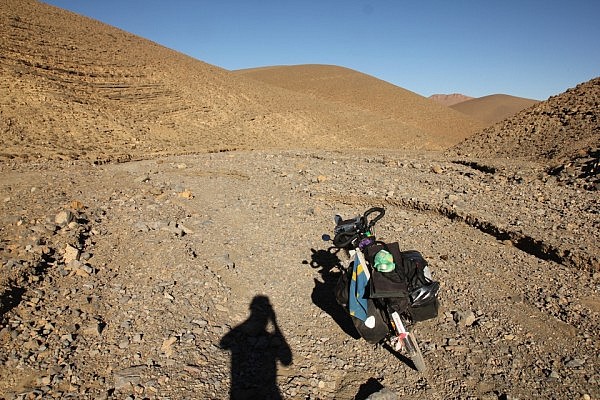 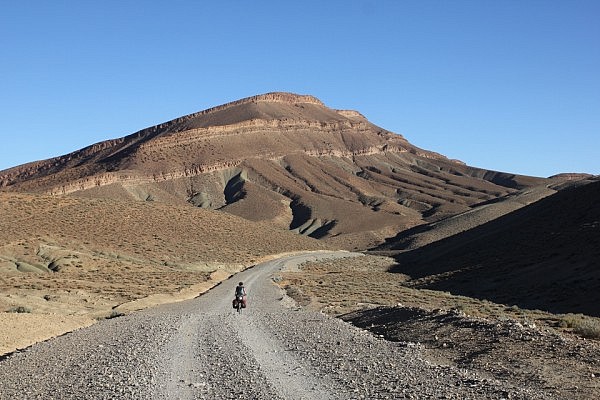 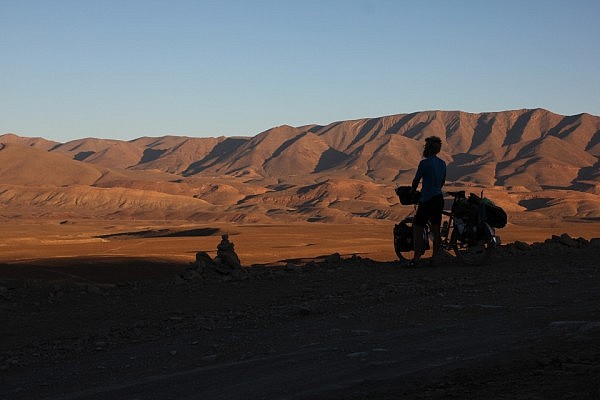 Most people that live in these mountains are Berbers, the indigenous ethnic group of North Africa that lived here before the Arabs came in the 7th century. They are very hospitable and almost every single day we were invited for a cup of tea, or Berber whisky as they call it. The kids on the other hand were troubling us. Often when entering a village, kids spotted us and came shouting and running after us. We tried to warn each other by saying things like “incoming three o’clock!” or “incoming from behind the mosque”. They beg for candy, money and pens. Some of them tried to steal things on our rear racks, and one time we noticed that Jenny’s map was gone. She was almost hit by a rock too, so this stupid behavior is very sad. 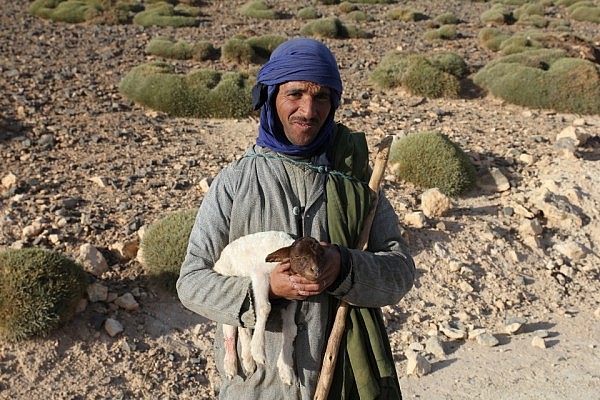 During our last cycling day together, we entered what started as a small gully that just grew and grew to finally form the impressive Todra Gorge, Moroccos most popular place for rock climbing. It was funny, because usually when I say that I am from Sweden people reply “Zlatan Ibrahimović!”. But in Todra, they replied “Said Belhaj!” because he is a famous Swedish/Moroccan rock climber that has been here many times. It was very few people here at the moment so I didn’t find any climbing partner, but did get to do some bouldering. Our three weeks together passed quickly and Jenny had to go to Marrakech the next day to catch her plane. We had a final avocado milkshake and took farewell. I hope that we will hit the road again someday, Insha’Allah! 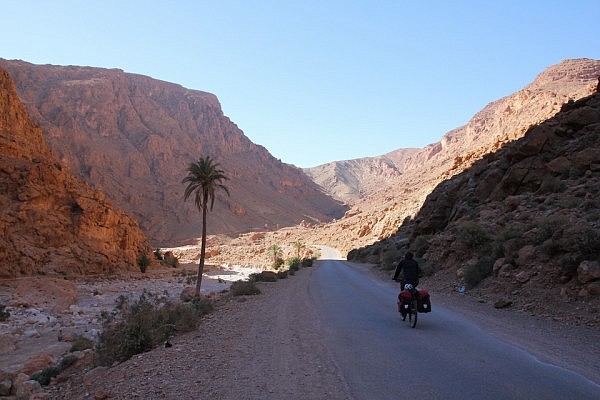 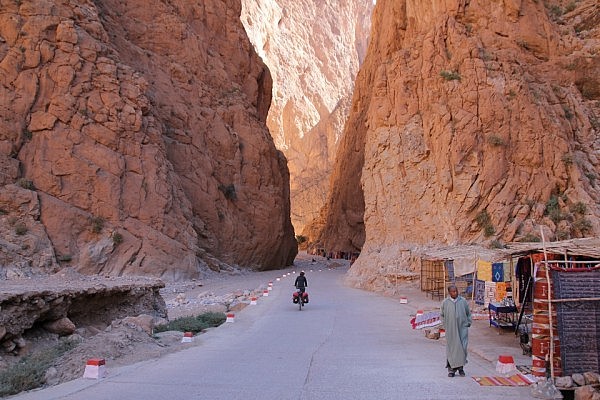