Let me try to describe a typical West-African village that I have seen so far on the trip, and how it’s like to cycle through it.

The village consists of either round huts or rectangular houses covered with roofs made of either grass or corrugated iron. The walls are made of homemade mud bricks. Concrete is rare, but families with more money might afford it. The same goes for painting the walls – this is not often done.

The food is prepared outside next to the house over an open fire, often with three rocks providing support for the pots and reflecting the heat. The most central equipment of the kitchen is a kind of giant mortar where women and children help each other to pound grains, cassava or corn. This activity is particularly common to see in the late afternoon when the dinner is being prepared. Since this job requires a big effort, women can sometimes be seen bare-breasted with the sweat pouring down their faces. When it’s necessary to taste the food to see if it requires more salt for example, spoons or other utensils are rarely used, but instead the content is dropped onto the palm which is then licked clean.

The houses are situated along the road; this is where all the activity happens. Behind the houses, small footpaths lead the way to plantations with cassava, rice and peanuts and sometimes fruit and vegetables depending on the season. Water is fetched from either homemade wells with rope and buckets, or from a well with a hand pump built by a charity organization. With the help of plastic containers, women and children carry the water back to the house by balancing it on their heads. In the mornings, the queue for fetching water is often long and this creates a place for the women of the village to gossip about the latest happenings. It’s not only water that is carried on the head by the way; firewood, machetes, books, wallets and sometimes even mobile phones are all carried using one’s head.

The village always has a big central tree, either a mango tree or a cotton tree, whose cooling shadow also creates a natural meeting place. This is often where the men of the village are found, in particular the elders. Here, they talk to each other, rest and observe the road and greet passing people.

If the village is a bit bigger someone will most definitely be running a small shop. Here you can buy cigarettes, tea, candy, cookies, sardines and other basic items. Fruit and vegetables cannot be found here; this is sold along the road by the women who have grown them. When it comes to vegetables, you are often limited to onions and tomatoes, but depending on the season also other varieties.

If the village is even bigger you will find petrol sold in bottles. Maybe there’s even a local mechanic. And is the village even bigger than that, you might find hairdressers, pharmacies and perhaps even a woman running a small restaurant. In that case, she is only serving one dish: rice with sauce (peanut or cassava leaves) that has very small pieces of fish or meat in it.

Regardless of the size of the village, there is always a mosque or a church. This is of course the most lavish building here. Electricity is nowhere to be seen in the villages, without moonlight it will be completely dark. If you are lucky, bigger places sometimes have a generator that goes on and off for a few hours after dark, but let’s return to our small village.

I forgot to mention the toilet. Usually it’s everywhere within a short walking distance, but it is also common with a dedicated one which in that case is placed a bit away from the house and consists of a big pit with a lid over it that has a hole in the middle. When you go to do your thing, a jug is filled with water and brought along; toilet paper is not used. Sometimes, sheets from old school notes can be seen lying around too. To create a feeling of privacy, the toilet is either surrounded by branches, corrugated iron, bags of rice or a combination of these.

To get to and from the village, for example to travel to the market, a so called bush taxi is used; a kind of shared car or van full of people and their luggage. It is not unusual to see a normal car with 7 people inside carrying the following things on the roof: 1 bed or 1 motorbike, some bags of rice, a couple of goats, some plastic chairs, X number of containers filled with palm wine plus a group of chickens hanging along the sides of the vehicle. And it doesn’t stop there. Sometimes even one or two young men can be seen on top of everything, helping the driver to spot traffic and potholes in time so that he (female drivers do not exist) can drive faster through the curves. Probably loaded three times more than the recommended limit, the bush taxi is a spectacle indeed!

Apart from going to the market, fetching water and cooking, the woman is taking care of the kids, maintaining the garden, cleaning, doing laundry and fetching firewood, and it seems hard to believe but she still have time to plait the neighbors’ hair, something that can take half a day! In other words, the African woman works a lot, and fortunately (but far from ideally), she gets help from her children. What the man is doing I don‘t really know. If he’s not sitting under a tree drinking tea, then he’s probably out in the bush to clear the ground with his machete or collect palm wine. Or he’s sitting and waiting for someone to come and buy whatever he is selling.

Anyway, when the working day is finished it’s time to eat dinner. This is done in the following manner: men and older boys share the food from a common bowl, women and girls from another one. The small children get one bowl. And if the family has any elders still living, they always get their very own plate and don’t have to share with anyone. The food is eaten with your hands and is what it seems like often swallowed without chewing. Every bowl is emptied within 2-3 minutes. Afterwards, never during the meal, the people drink water.

Not only is the woman a workhorse, she is also a baby factory. The families are usually very big and women, regardless of age, always seem to be carrying babies on their backs. This is also the reason for why a massive group of children is the first thing that welcomes you to the village, with everyone shouting “white man” in the local language like in a deafening chorus. If you stop, it is not unlikely that some of the smallest children start to cry and hide behind their mothers, who then start laughing and forcefully try to expose them even more to the white man for what seems like their own entertainment. Are the kids a little bit older and more brave, they might come and touch those strange hairy legs.

Sometimes people ask for money and gifts, sometimes for food, and sometimes they simply want my bicycle. Many men express their great love for Sweden although they have never heard about the country before, and they wonder how we can stay in touch so that I can help them in the process of getting there. In rare cases you receive direct but discrete requests from girls if you would possibly like to marry them. No matter what is being said, you receive thousands of smiles.

At the same time as you have to answer all these greetings and questions, you’re busy making sure that you don’t cycle into a goat, a sheep or a chicken that are all part of the village ecosystem and move around freely. You must also watch out so that you don’t cycle into one of the many holes in the road, that despite being right in front of the houses have never been repaired. But after some thinking you realize that if the traffic that pass by the village has to slow down, the chance is bigger that they will stop to buy something…

Finally, when you have passed the village, you don’t have to wait many kilometers until you reach the next one where the whole process is repeated :-) 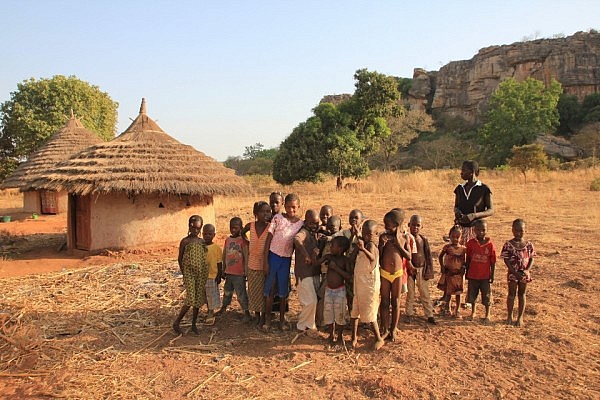