Although the situation in Central African Republic (CAR) had calmed down a little bit when I was around, attacks and massacres still continued, especially in the north. Ceasefire talks between the ex-Séléka rebels and the anti-Balaka fighters had recently been held but the final agreement was immediately rejected, not leaving much hope for the civil war to come to an end anytime soon. I had long since discarded the idea of cycling through CAR, but when I was in Eastern Cameroon, I met someone who changed my mind. Manu, a guide from Spain who arranges unique trips for adventurous people all over Central Africa, told me about a corner of the country that was supposed to be safe and free from rebels. So I thought, what the heck, let’s go for it!

I arrived to the area of the Dzanga-Sangha rainforest reserve in a dugout canoe. Here, I had my first encounter with the people that I ended up staying with for a week: the Bayaka pygmies. I was planning on advancing a bit the same day, but got a late start because of heavy rains. Eventually, I decided to push on and was directly surrounded by thick vegetation sometimes brushing against my legs along the narrow road. I was making slow progress though, as I constantly had to stop and wade barefoot through deep pools of water. It was starting to get dark and I had only thick jungle ahead of me for the next couple of hours, so I realized that I would have to cycle the last bit in the dark. But then suddenly I noticed that I had lost my bike computer, oh no! I must have accidentally ejected it from its position without noticing. I started to backtrack on foot, searching the road for something small and black, but I realized that it was going to be hard to find it among grass, sand and murky water. After an hour of searching I decided to head back to the village and continue tomorrow, I refused to accept that I would have to spend the rest of the trip cycling without knowing the distances. 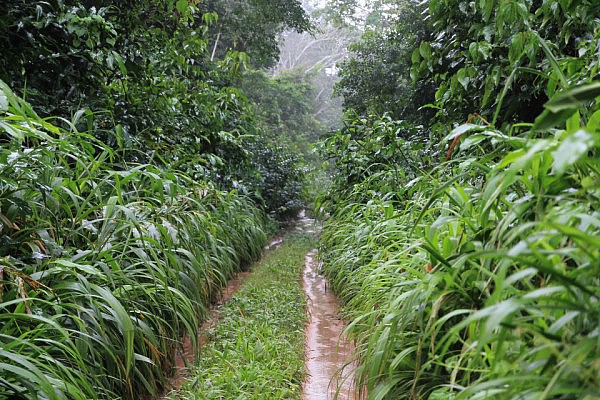 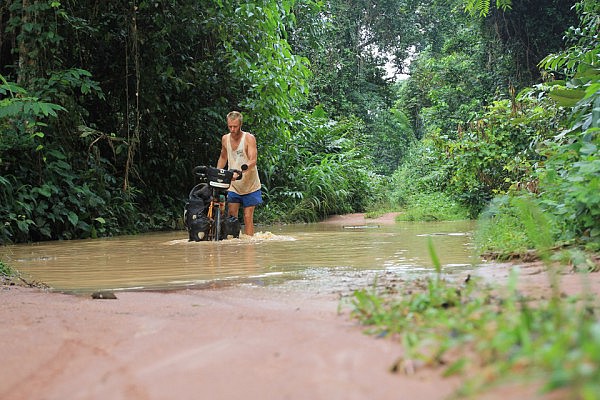 When I got back to the village I told the villagers about what had happened and offered a reward to the person who could find it for me. A group of ten pygmies set off on foot before I had even told them how many kilometers it was to the place where I had lost it. Neither did I have time to explain how the thing looked like before they left. But in less than one hour, just before dark, they returned and had to my big surprise retrieved the missing piece! Perhaps I shouldn’t have been surprised because these hunter-gathering people live from the forest and are experts at finding and tracking things. 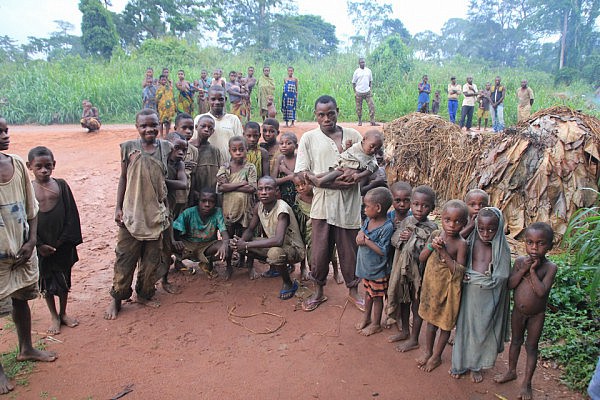 Compared to the Bakas in Cameroon, the houses of the Bayakas were sometimes even more simple and people actually lived in huts made from branches and leaves – here they were not only used for cooking. Their construction reminded me of the snow-made igloos that Inuits from Canada and Greenland used to live in. Their huts also had a round main chamber sometimes with a small tunnel attached to it working like an entrance. 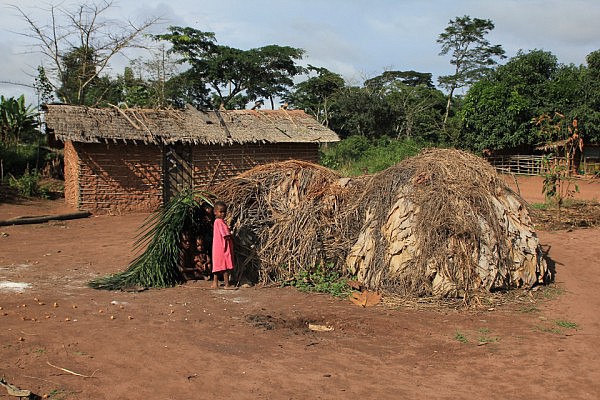 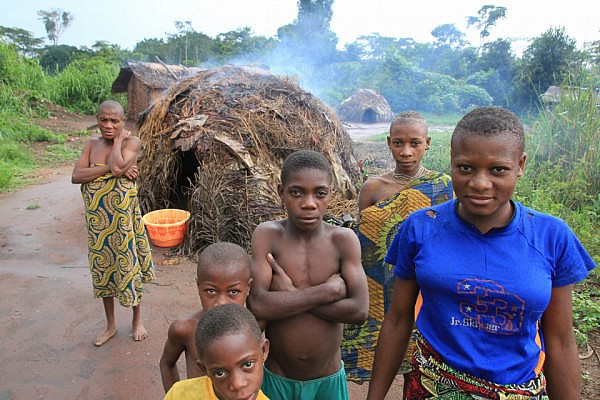 Most women are bare-breasted and many have filed their teeth sharp and pointy. At first sight, you would think that just like with animals, this is for eating meat or something, but it’s actually only a kind of decoration that is believed to be attractive. At first, pygmies are usually much shyer than the Bantu people, but once you spend some time together they are super friendly. 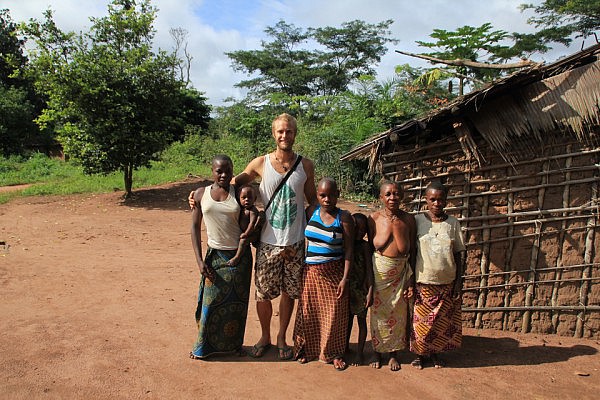 One day we went hunting. Not using traps or rifles, but using a net (!). This is something that traditionally women do, and I think they brought a total of 100-150 m of nets, which they placed above the ground in a curved shape and attached to small trees and bushes. Then they entered inside of this formation from behind, making noises in order to scare animals and drive them into the net, where the men are waiting to catch them. Unfortunately, we didn’t have any luck but we found many other things and I learned about different edible caterpillars, plants and fruits. 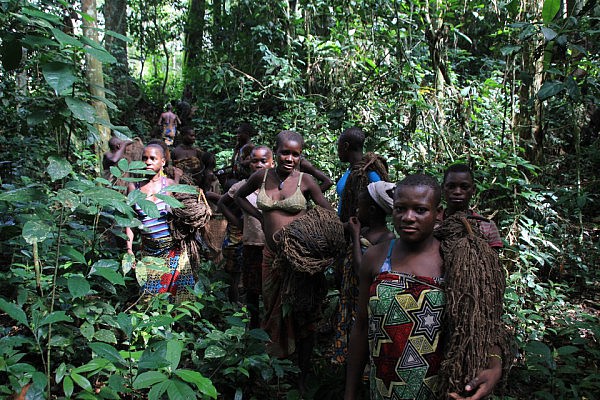 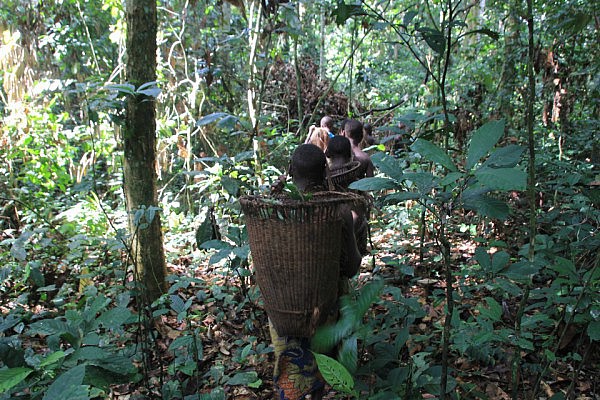 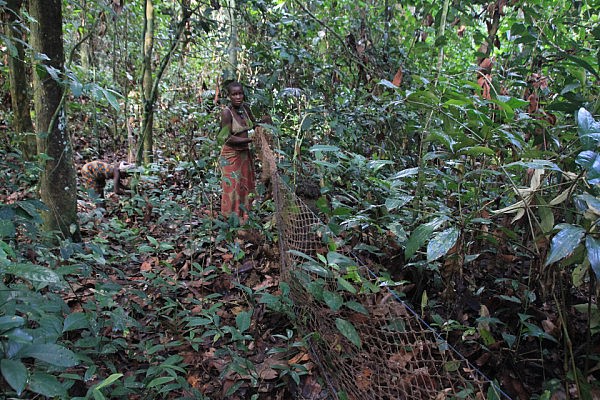 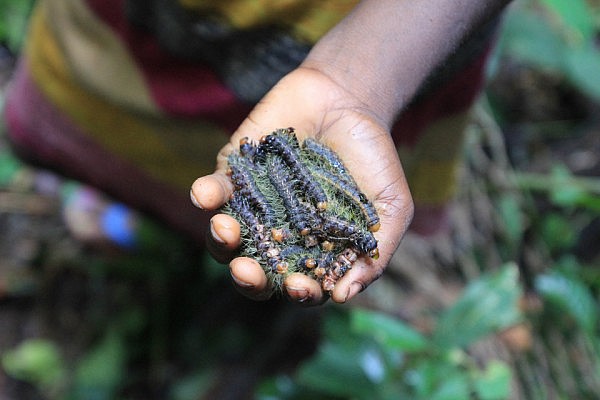 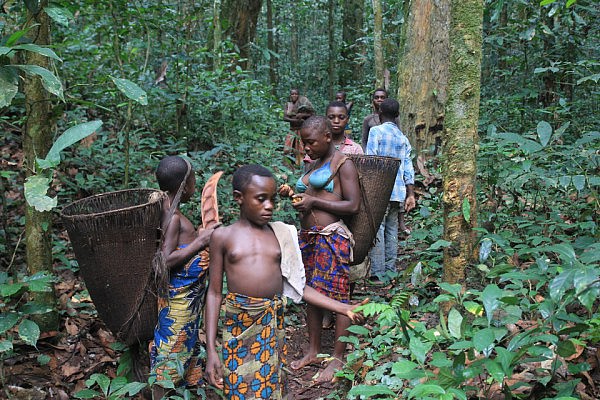 The validity of the visa that I received upon arrival was questionable. I asked almost everyone I got a chance to speak to about the security situation heading north, and I got different replies each time. I had found out about a road that wasn’t on my map but that could take me into Congo-Brazzaville, but given the situation I opted for the safer option to go back the same way I had come, hence only seeing a small corner of the country.

During my last night, a traditional party was held. Not for me, not for a group of tourists, but for the locals themselves to enjoy, and this made it very special and authentic. Palm wine was being passed around to the contagious rhythm of the drums and women tied leaves around their hips to make it look good when dancing. As the hours passed and the atmosphere grew more high-spirited, two sisters started flirting and fighting about me. They hugged me and kissed me and dried off my sweat onto their own forehead. Apparently, women in this society have a high rank and show without hesitation what they want. 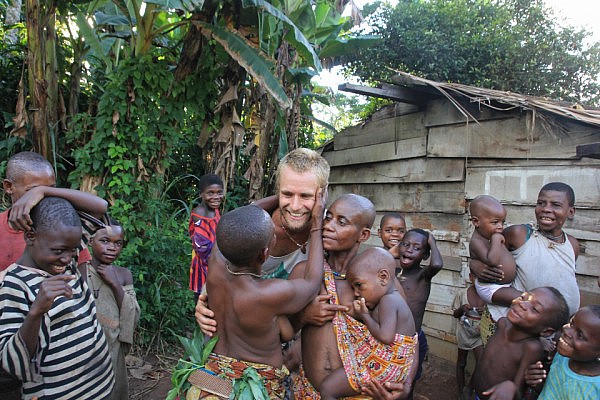 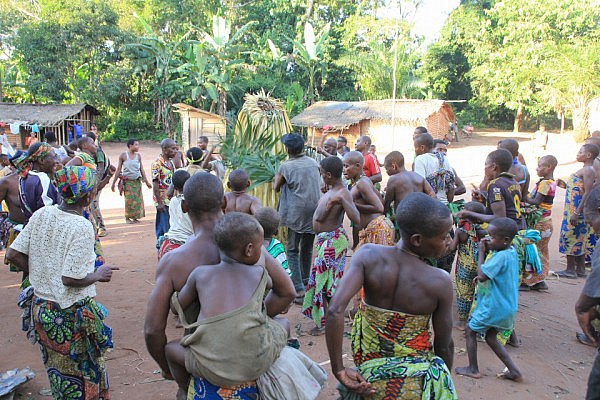 Jengi, a worshiped forest spirit appeared from time to time and chased the people in the dancing crowd, who then “fought back” and drove him away. Dressed from top to bottom in hundreds of strips cut from the leaves of the raffia palm, it was fascinating and beautiful to see this “creature” dancing around, especially with the effect created by the leaves when he spun around like this: 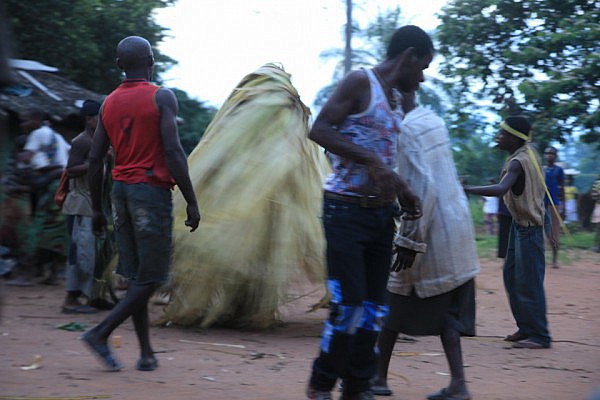 The party lasted until nightfall, and I was told that if the moon appeared, Jengi would come back and the dancing continue. When I walked back to pitch my tent, the sandy path was illuminated by both stars, lightning and fireflies all at the same time, and I remember thinking that it was something magical and mysterious about the air that night. This was a night I would never forget.